The Moose Fraternity has partnered with rising driver Ross Chastain as the pursuit of the season’s Xfinity Series Championship gets down to its final weeks in 2020. Look for Chastain’s No. 10 car, emblazoned with the Moose Fraternity logo, as he competes for victory in the Drydene 200 NASCAR Xfinity Series Races, August 22 & 23 in Dover, Delaware; and at the Wawa 250 Powered By Coca-Cola on August 28 at the famed Daytona International Speedway in Daytona Beach, Florida.

Chastain earned his first Xfinity Series victory at Las Vegas in 2018, driving for Chip Ganassi Racing. His second Xfinity win came at Daytona International Speedway with Kaulig Racing in 2019.  Chastain’s No. 10 car currently stands fourth in the Series standings having finished no lower than ninth in his last ten races, including four top-three finishes.

“There are a lot of our members, and potential members, who are committed fans of NASCAR racing,” according to Director General Scott Hart. “We were offered the chance to promote the Fraternity to this influential group of individuals, and after talking with Ross Chastain and the Kaulig racing team, felt comfortable that this partnership could bring not only excitement for our members, but a unique focus to our missions of helping children, seniors and communities.”

Noted as NASCAR’s busiest driver, Ross Chastain is a 12th-generation farmer and 8th-generation watermelon farmer from Alva, Fla. When not working in the field, Chastain, a member of Tice and the Shores, FL Moose Lodge 1297, competes in all three of NASCAR’s top-tier series. When off the race track and farming field, Chastain enjoys spending time with family and friends and being outdoors.

Added Hart, “Although we are the primary sponsor for only the races in Dover and Daytona, our relationship with Ross endures through the Series Championship this November in Phoenix.  I would encourage our lodges to develop viewing parties surrounding the races and request dispensation to allow potential members and guests to be part of the excitement.” 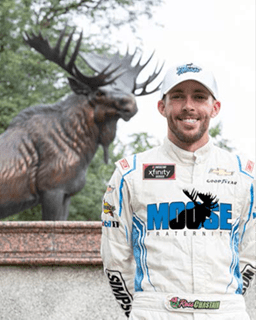